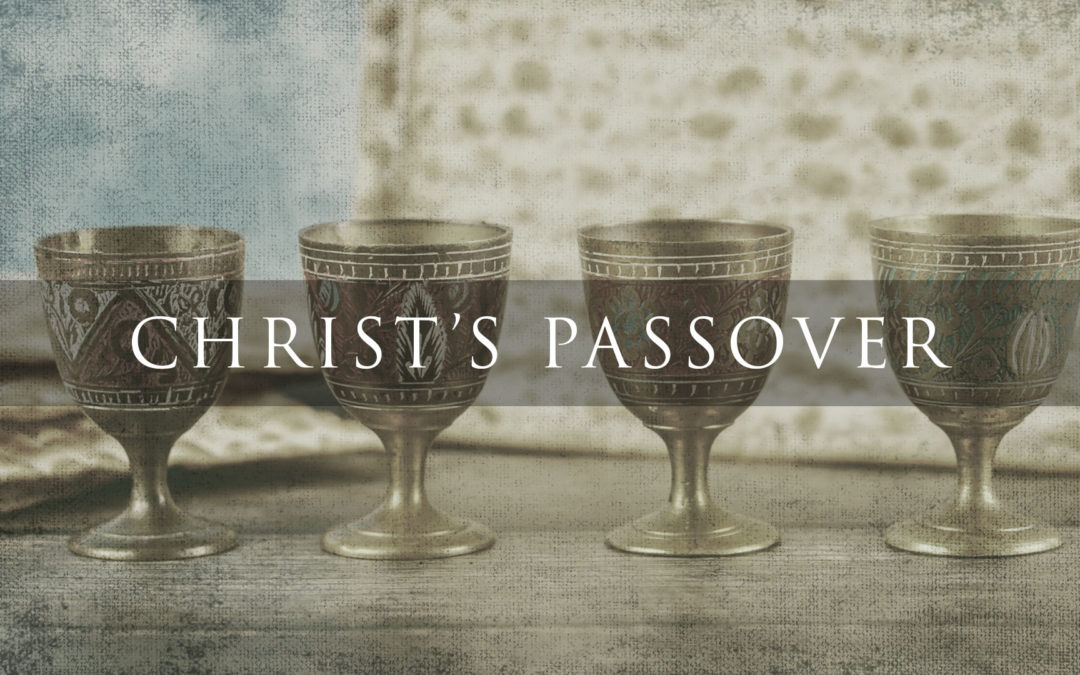 The only true ritual in Christianity involves a piece of bread and a cup. We call it the Lord’s Supper or Holy Communion. It centers entirely on Christ and Him crucified. He is the substance of our redemption. In the Lord’s Supper, symbols are used to participate in an engaging commemoration of Christ’s death. The church is to perpetually emphasize the redemptive work of Christ, appealing to all our senses.

All that we need to rightly commemorate our Lord’s death is found in Scripture. Scripture alone is the authority under which we understand and celebrate this gospel ritual.

Yet many Christians do not realize the historical context in which our Lord instituted this ordinance for His church. The Lord’s Supper was instituted in the Last Supper. It was during the celebration meal of the Passover (Matthew 26:19). Here, the Light of the world shines new meaning on an old model. An old ritual reveals a new reality. Old symbols speak of new significance. Here, a 1500-year shadow gives way to a greater and more glorious substance. As Charles Spurgeon said, “The Jewish Passover was made to melt into the Lord’s supper, as the stars of the morning dissolve into the light of the sun.”

To help us better appreciate that glowing and momentous occasion, let us consider the best-known historical practice and order of the Jewish Passover meal as gleaned from the Mishna.[1] As the Jewish historian, Alfred Edersheim (1825-89), wrote, “we can scarcely doubt that what the Mishnah declares as so essential formed part of the services of that night.”[2] The ceremonial details of the Passover are found in m. Pesahim.[3]

The symbolism of the four cups is derived from the four promises that God gave to Israel before the Passover in Exodus 6:5–7.

Cup of Sanctification: “I will bring you out from under the burdens of the Egyptians” (Exodus 6:6).

The meal begins with the host taking a cup of wine and reciting the kiddush (prayer of sanctification).

Luke’s account includes the detail of Jesus starting the supper by taking a cup (Luke 22:17). Later, He refers to another cup, the same cup mentioned by Matthew and Mark, taken after supper (Luke 22:20).

At this point, the judgment of God and the deliverance of His people is commemorated, starting with the first dipping of food. This included dipping bitter herbs and bread.

Cup of Deliverance/Judgment: “I will deliver you from slavery to them” (Exodus 6:6).

Now, with the second cup, the explanation of the judgment and deliverance of God formally commences.

m. Pesah 10.4 — “They mixed for him a second cup of wine. And here the son asks his father [questions]. But if the son has not got the intelligence to do so, the father teaches him [to ask by pointing out:] ‘How different is this night from all other nights!”

A second ceremonial dipping would now be conducted accompanied by an explanation of the Iamb, the bitter herbs, and the unleavened bread. This is the central place of the Haggadah. The drinking of the second cup would be completed here.

m. Pesah 10.5 — “Whoever has not referred to these three matters connected to the Passover has not fulfilled his obligation, and these are they: Passover, unleavened bread, and bitter herbs.”

A second washing would then take place followed by the host taking bread, breaking it, and pronouncing a blessing.

m. Pesah 10.6 — “And he concludes with [a formula of] Redemption. … ‘Blessed are you, Lord, who has redeemed Israel’ … The unleavened bread one must lift up.”

Here, commemorating the central greatest act of redemption in history, Jesus redirects the pointers of the Passover to Him. Jesus has reserved to reveal the greatest mystery of His mission for this sacred ceremony—the most central celebration of God’s redemption of His people. He does this evidently in the very place of formal explanation (Haggadah), making it all the more astonishing.

Cup of Redemption/Blessing: “I will redeem you with an outstretched arm and with great acts of judgment” (Exodus 6:6).

Moishe Rosen notes that “the Mishnah states that the third cup was the most significant of all. The third cup had two names: the ‘cup of blessing,’ because it came after the blessing or grace after meals, and the ‘cup of redemption,’ because it represented the blood of the Paschal lamb.”

Matthew 26:27–28 – And he took a cup, and when he had given thanks he gave it to them, saying, “Drink of it, all of you, for this is my blood of the covenant, which is poured out for many for the forgiveness of sins.

1 Corinthians 11:25 – In the same way also he took the cup, after supper, saying, “This cup is the new covenant in my blood. Do this, as often as you drink it, in remembrance of me.”

Clearly, Jesus is revealing that His death is the central substance of true and final redemption. The shadow has given way to the substance.

Cup of Consummation/Praise: “I will take you to be my people, and I will be your God” (Exodus 6:6).

The Passover ceremonies would conclude with the fourth cup and the recitation of the Hallel Psalms.

m. Pesah 10.8 — “At the fourth cup one concludes the Hallel Psalms and recites the great Hallel.”

Matthew 26:30 – And when they had sung a hymn, they went out to the Mount of Olives.

Interestingly, before this final step Jesus says,
Matthew 26:29 – I tell you I will not drink again of this fruit of the vine until that day when I drink it new with you in my Father’s kingdom.

By this statement Jesus is saying that He is going to die and depart. He will not partake of the cup again until He returns in the glory of the Kingdom of God. In Luke’s account, He says “until it is fulfilled” (Luke 22:16) and “until the kingdom of God comes” (Luke 22:18). It may well be (though it is not certain) that He is recorded as saying it at this point because He was explaining why He was not going to drink the fourth cup—the cup of consummation. That cup represented the promise, “I will take you to be my people, and I will be your God” (Exodus 6:7), which reminds us of:

Revelation 21:3–4 – And I heard a loud voice from the throne saying, “Behold, the dwelling place of God is with man. He will dwell with them, and they will be his people, and God himself will be with them as their God. He will wipe away every tear from their eyes, and death shall be no more, neither shall there be mourning, nor crying, nor pain anymore, for the former things have passed away.”

At some unspecified time in the future, Jesus promises that He will again celebrate with His disciples as King in His kingdom.

The import of all this rich symbolism both teaches the meaning of Christ’s death and informs the regular practice of His church on earth. In the Lord’s Supper, we are repeatedly recalibrated to the gospel, with all our senses, as we “proclaim the Lord’s death until he comes” (1 Corinthians 11:26).

[1] The Mishna contains in writing the oral traditions and rabbinical commentaries of the Jews. It is still considered an authoritative body of religious thought by Orthodox Jews. The Mishna was compiled sometime between A. D. 100 and 210.

[3] Quotations are taken from The Babylonian Talmud, translated by Jacob Neusner.

[4] Also called the Cup of Judgment.

[5] Also called the Cup of Blessing.

[6] Also called the Cup of Praise.