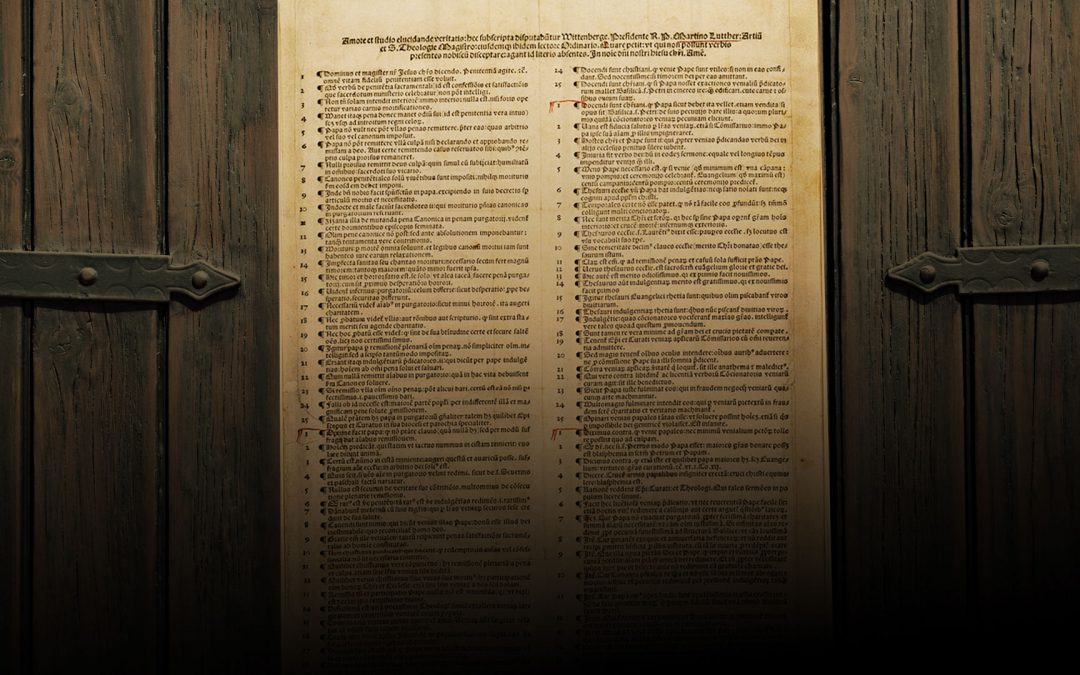 On this day in history, 501 years ago, a young German monk by the name of Martin Luther made his way from his monastery, through the town of Wittenberg, to the Castle Church. It was an important day and in his hand was an important document.

It was All Hallow’s Eve, or the eve before All Saints’ Day. On that day, many people from the surrounding regions would make a pilgrimage to Wittenberg in order to appeal to the excess merits of the saints in hopes of acquiring acceptance before the righteous demands of God. Wittenberg was not only the capital of the politically powerful state of Electoral Saxony, but more importantly it hosted a stunning collection of relics. The Castle Church boasted more than 19,000 relics proudly displayed in nine aisles. On All Hallow’s Day (All Saints’ Day), a special dispensation of merit was offered from such relics according to Roman Catholic prescription. Sinners who made pilgrimages to venerate relics could earn merit for themselves or loved ones. Wittenberg was offering 100 days out of purgatory for each object gazed upon with veneration. It was a worthwhile endeavor.

While this was an annual practice, All Hallow’s Eve 1517 was different. Along with commoners, clergy would be traveling to Wittenberg. It was a prime time to host a collegiate discussion.

In Luther’s hand was a poster containing 95 hand-written statements or theses for public discussion among the clergy. He posted his Ninety-five Theses to the door of the church as a summons to an academic disputation. This was not an uncommon practice. His document was written in Latin with the title, “Disputation on The Power and Efficacy of Indulgences.” Luther’s preface explained his purpose: “Out of love and zeal for truth and the desire to bring it to light, the following theses will be publicly discussed at Wittenberg under the chairmanship of the reverend father Martin Luther, Master of Arts and Sacred Theology and regularly appointed Lecturer on these subjects at that place. He requests that those who cannot be present to debate orally with us will do so by letter.”

Luther was reacting to the practical abuses of selling indulgences for the forgiveness of sins, including the veneration of relics for merit. Little did Luther know that this would spark a worldwide Reformation. As the protest against abuses escalated, the glory of the gospel became brighter and brighter. The Reformation was, above all things, a return to the gospel.

The Reformation marks the rediscovery of realities far greater than its own history. It is but a window in an otherwise darkened room of human invention and interest; a window to fresh beauties, truths that surpass all that man can create, construct, or corrupt.

The Reformation, then, embodies significantly more than a remodeling of Roman Catholic religion. To classify the Reformation as simply a religious or ecclesiastical development is terribly shortsighted and either prejudiced or unlearned. It represents much more than a correction to certain errors in Roman Catholicism and extends with the power of tremendous influence beyond the church, moving and shaping mountains in society and history.

Those who delight in Reformation history, therefore, should prayerfully avoid making the Reformation out to be about the Reformation—it’s not! The Reformation exists to make much of Christ, not the Reformation. It is a means to a much greater end. Its importance transcends its history and its purpose transcends man. We can easily lose sight of the forest in our passion to pass on the legacy of this great sequoia. We are to steward this profoundly important history for no lesser aim than the promotion of Christ among the nations, to the glory of God and the joy of man in Him.

We encourage you to look at the resources available at reformation stewards.com. to learn more about the history of the Reformation to glorify God and increase our joy in Him!