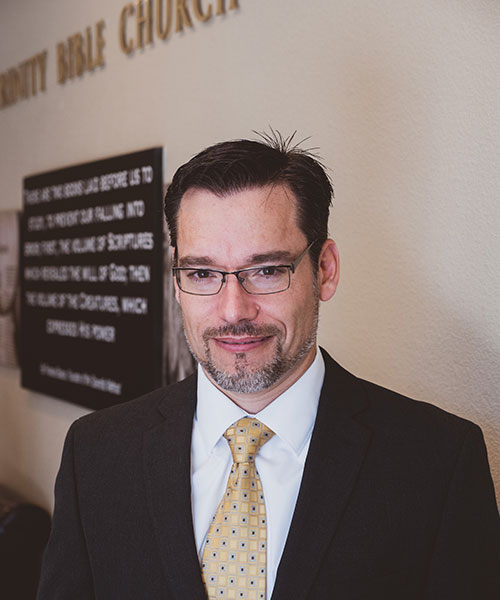 First, I am a sinner saved by grace through Christ and Him crucified. My identity is in Christ alone (Gal 2:20). Second only to Christ, I am graced to know and be loved by a most remarkable and godly woman. Athena is my faithful bride of over twenty-one years and the gifted mother of our six children: Ashley, Junior, Joshua, Grace and Faith (twins), and Elizabeth. I thank God for my wife and each of my children.

I thank God for His church. I count it a tremendous privilege to serve God’s people; to study the Word of God, and share what He has taught me in the Scriptures each week; to pray and minister to the needs of God’s people to make much of Christ; to partner with the church to love and serve people who are without Christ in the world.

Manny V Pereira III was born and raised in the Central Valley of California. He served the Roman Catholic Church as an altar boy (altar server) from the age of five to sixteen. God opened his heart to see the glory of Christ and the wickedness of his own sin under the preaching of the gospel in a Protestant church. God graciously granted him repentance and faith in Christ in the summer of 1992.
From a young age Manny has enjoyed and studied God’s creation. He became a student of physics. With two applied science degrees, he entered IBM’s Almaden Research Center. After seven years of success at the Almaden laboratory, he gracefully departed from the science and technology profession to pursue training for ministry (see article).

Trinity Bible Church had been Manny’s home church for several years by the time that he was wrestling with the idea of entering ministry. Prior to moving his family to southern California for seminary, Trinity Bible Church called him to serve them in pastoral ministry. He and his wife gladly accepted. The church generously aided and supported Manny through seminary. Others from Grace Community Church in Sun Valley helped with transportation and lodging. He traveled weekly from San Jose to Burbank and back for three-years. Through it all, his wife proved to be the most remarkable supporter of all. Manny now holds a Master of Divinity degree from The Master’s Seminary (listed in the TMS Alumni Directory).