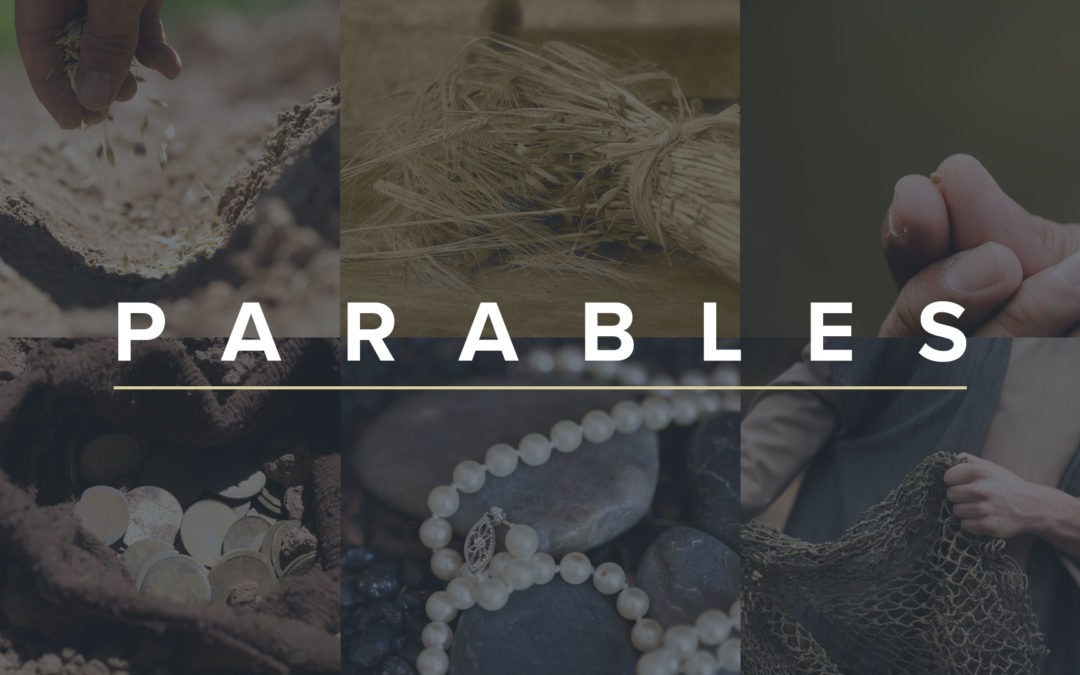 It has well been said that “the parables of Christ occupy a sure place in the library of the world’s literary masterpieces.” To this we may all agree. But to what chief end did Jesus speak in parables?

What is a Parable?

A parable presents an unknown or unclear reality by making a comparison with one that is known and clear. The key feature of a parable is comparison. The Greek word is a compound that combines “to cast” and “alongside” to construct a comparison. The mathematical term “parabola” represents a basic equivalent, underscoring the mirror effect of the curve. It has a relatively broad application as it translates the Hebrew word māshāl, which denotes a proverb, maxim, simile, allegory, riddle, etc.

Why Did Jesus Speak in Parables?

Parables uniquely marked Jesus’ teaching. Though constituting about one-third of His recorded words, His parables are among the most remembered of all. The English language bears the indelible marks of such figures as “the good Samaritan,” “the prodigal son,” “the lost sheep,” “the talents,” etc. A parable tends to more powerfully captivate the mind and thereby impress itself into the mind’s memory. Richard Trench (1867) rightly acknowledges, “There is a natural delight in this manner of teaching, appealing, as it does, not to the understanding only, but to the feelings, to the imagination; calling the whole man, with all his powers and faculties, into pleasurable activity: and things thus learned with delight are those longest remembered.” Because most parables are cast as short, earthly stories many conclude that their purpose was to leverage the power of a relatable story in order to enhance the teaching of spiritual truths. Some say that it is because they make complicated truths simple to understand. Others say that Jesus spoke in parables to illustrate and clarify, to illuminate and shine light on His doctrine, and to aid with life application. Indeed, parables are more memorable than naked propositions. They tend to stir emotion more effectively, to maintain attention, and to overall offer a more interesting form of teaching.

But are these the reasons that Jesus gave for teaching in parables? True as these gracious benefits are, illuminating aids they are not. This is the case at least in Matthew 13 where the first occurrence of the word “parable” is found. It describes Jesus’ form of speaking to the crowds on the heels of indicting “this generation” of Israel through her leaders for conspiring to destroy Him and formally rejecting Him (Matthew 12–13). In this context, Jesus “told them many things in parables” (Matthew 13:3). His disciples detected something different—unusual—in Jesus’ teaching. So they ask, “Why do you speak to them in parables?” (Matthew 13:10). Now if parables served to clarify truth by simple illustration this question would be absurd, on par with, “Why are you making it easier for them to understand you?”

The obvious point of the question, which is further evidenced in Jesus’ explanation, is that He was speaking to the crowds in parables to withdraw His light from their darkness. It was a judgment on a rejecting generation. Parables are not just stories. They are not simply illustrations. They always offer less light than explicit teaching; otherwise, explanation would be unnecessary (Matthew 13:18-23; 36-43). Like riddles, the correct meaning of a parable is not on the surface. The lesson is not necessarily obvious. They have built in to them a certain unavoidable ambiguity. They inherently mean more than they say. The Puritans used to say that they are apples of gold in pictures of silver. Because they are always less explicit, their explanation is left open-ended. For these reasons, parables are notorious for misinterpretation and misapplication—church history testifies to this voluminously. They may be the most remembered of all of Jesus’ words, but they are certainly not the most understood.

Secrets of the Kingdom

The parables of Matthew 13 play a distinctively critical role in redemptive history. They are much more intricately linked to the specific events in Jesus’ ministry than is commonly appreciated. The reader of Matthew would do well to remember that it is an inspired biography of Jesus’ life. It is not a prescriptive catalogue of life principles.

In Matthew 11 and 12, active emphasis has been on Israel’s proud imperceptivity. Emphasis now turns to Jesus’ formal response in chapter 13. He cements His just judgment on a rejecting generation. Far from making it easier for Israel to understand His greatness, Jesus veils His value. He hands out pieces of the kingdom puzzle in parables. And this is the genius of His method: He conceals as He reveals. Revelation is now given in riddles, and only the grace of God can account for understanding.

There are two audiences and two distinct purposes of His parables. The first audience is the crowds (Matthew 13:2-3, 34). To them His purpose is judgment (Matthew 13:11-15; see also Isaiah 6:8-13). The second audience is His disciples (Matthew 13:36). To them His purpose is to graciously unfold in picturesque form the secrets of the kingdom. The secrets of the kingdom are truths contained in Scripture, truths “even heard and known” from of old (Psalm 78:3), which have the trait of being “hidden” (Matthew 13:35; Psalm 78:1-2). For this reason, He offers explanation of His parables only to His disciples (Matthew 13:18-23, 36-43, 49). The King and His kingdom are advancing, but only as a secret.

The parables presented here have a purposeful function in the progress of Christ’s ministry. They explain Israel’s divergent responses to Jesus. They explain His ministry and the nature of the kingdom of God and its advance. They reveal “the secrets of the kingdom” long since promised. They probe and test the hearer. They fortify those who have ears to hear to stay the course, to trust and treasure Jesus as the Christ, and to fix their hope on what is yet to come.

Considering these contextual matters, the whole chapter becomes much clearer. The interpretive meaning and relationship of each of the parables becomes more evident.

After careful analysis, we may suggest the following structural outline for the chapter. 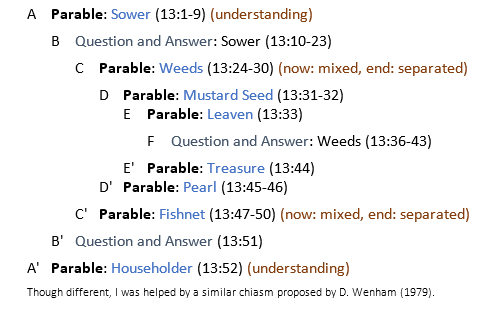 There are a total of eight parables evenly divided between two audiences: the crowds and the disciples. The two halves are plainly delineated in Matthew 13:36. Parables to the crowds precede this division and in each case begin with an explicit reference to Jesus giving a parable; something like, “He told them another parable” (13:3, 24, 31, 33). Parables spoken to the disciples lack any explicit introductory comment but instead consistently use the formula, “the kingdom of heaven is like” (13:44, 45, 47, 52).

The relationship between the two sets of parables is also interesting. The first (A) and the last (A’) both deal with the principle of understanding the secrets of the kingdom and are separated from the other parables by a question and answer interlude (B and B’). Unlike these, the parable of the weeds (C) and the parable of the fishnet (C’) both depict people who respond to Jesus and His message. But they portray a mixture of true and false responders. In both cases, the sorting out of what represents the righteous and unrighteous within the same company of people claiming to follow Jesus will not occur until the end of the age at the final judgment. The next corresponding pairs of parables (D-E and E’-D’) are uniquely short and coupled together in the chief lesson they convey. To the crowds the lesson has reference to the unexpectedly small beginnings of the kingdom. To the disciples it stresses the immeasurable value of what Jesus offers.

Summary of the Kingdom Parables

The following table summarizes each parable within the arrangement of the whole. This helps to visualize the two audiences and their respective focus. 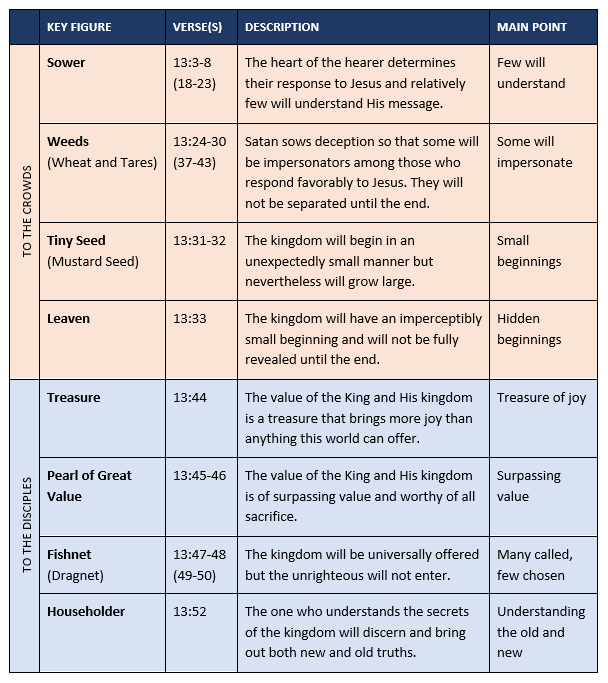 To what chief end did Jesus speak in parables? To the glory of God. This was His highest mission (John 17:1-5). Jesus spoke in parables with a twofold purpose: (a) to withdraw light from the hard-hearted and (b) to reveal hidden scriptural truths to the trusting. He is opposing the proud and giving grace to the humbled, who see their need. He is glorifying God and extending gracious joy to all who have ears to hear.

For further study and related resources, our Parables sermon series: