Show Us Your Majesty 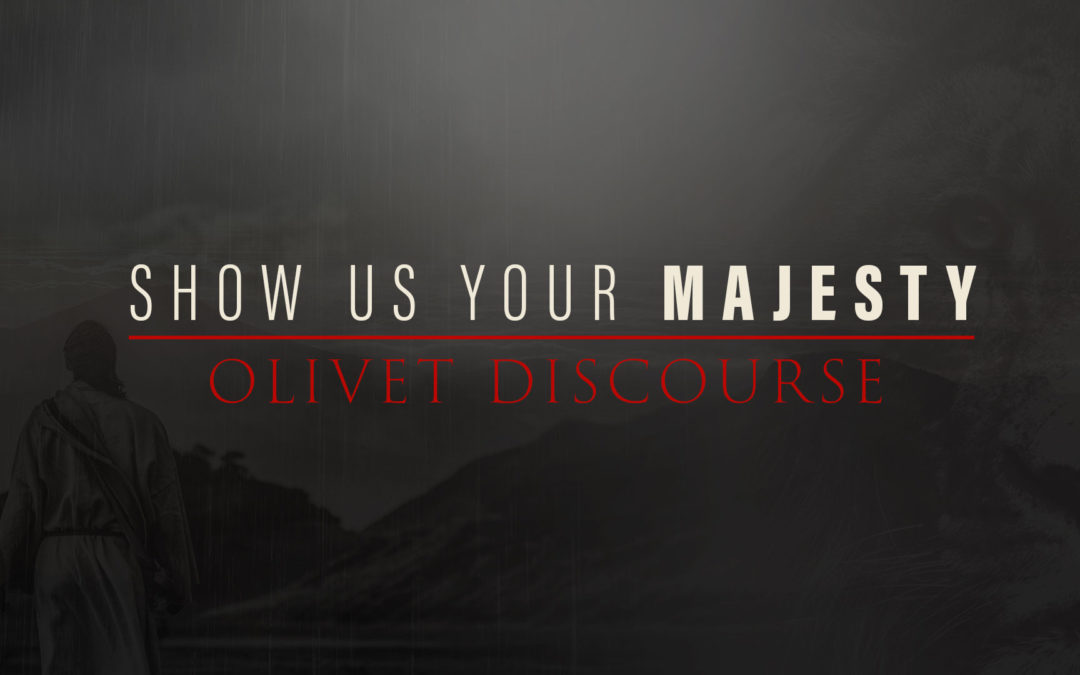 Show Us Your Majesty

A Series on the Olivet Discourse

God-with-us departs. It is a culminating ichabod. Jerusalem is being left desolate—gloriless. Anxiety appears to arrest the disciples as Jesus leaves the temple cursed. They struggle to make sense of what is happening. Groping for expected glory, they call attention to the majesty of the temple edifice. Surely the splendor of God’s house will serve the Christ. Surely the King will soon restore the kingdom to Israel. Shocking and alarming is Christ’s rejoinder: the magnificent temple will be demolished. The situation has just moved from bad to worse.

Opposite the temple, across the Kidron Valley, Jesus situates Himself on the Mount of Olives. As He does, His disciples anxiously come to Him in private, asking, “When will these things be?” In other words, “When will Jerusalem be judged and the temple demolished?” But no sooner are these words spoken than another two-part question of greater weight and import fired. “What will be the sign,” they ask, “of your coming and of the end of the age?” (Matthew 24:3). Obviously, their greatest concern centers on the timing of Messiah manifesting His majesty. They are anxious to know when Jesus will show Himself in all His kingly glory. “Your coming” conveys the significance of presence—especially the presence of majesty and power. The Messiah’s departure and return are not quite in the disciples’ repertoire at this point. Closer to their meaning is their eager expectation that Jesus reveal Himself as Messiah in kingdom glory and power. But they do not yet grasp the cross.

All that follows in Matthew 24 and 25 is in response to these questions. The disciples are unsettled and deeply concerned. Confusion rather than clarity marks their understanding of the promises and prophecies concerning Messiah. They trust that Jesus is the Christ, the Son of the living God, the King of Israel. Effectively, then, they are asking when He will show them His majesty—when the presence of His kingly power will be seen.

His response, classically known as the Olivet Discourse, provides the most substantial prophetic revelation ever articulated by Jesus. In this series, we will see how Jesus foretells and forewarns of when and how He will manifest His majesty. Despite what that generation may have seen in Jesus, all glory and honor and power belong to Him. Jesus will show Himself majestic, exceeding all expectation.