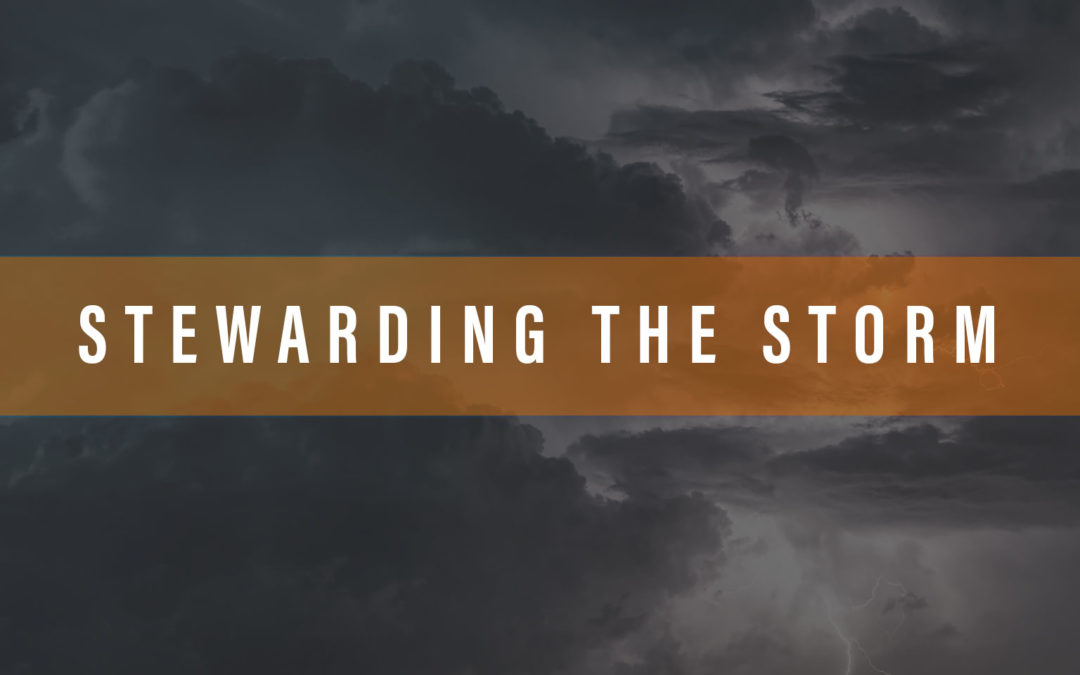 This generation of Christ’s church in America is facing an unprecedented challenge. COVID-19 has been declared a global pandemic. Anxiety and worry are spreading faster than the virus. Our world is in an upheaval. Fear is fueled by social media, news networks, and alarmists. Multi-national economic and political uncertainties unsettle the masses. But we are Christians—in and not of the world. We must not entertain fear of worldly loss. This is a time for Christ’s bride to rise.

The key to a right response to pandemic conditions is reading, praying, thinking and applying God’s word responsibly. Christ our Lord calls us to steward the storms of this life. Here is the first of three reminders to help you steward this storm.

Most of modern American Christianity is pretty shallow in its sensibilities to the curse. Our overall suffering quotient is relatively low. We are not always sensible to the fact that we are living in a Genesis 3 world. Might this be why we have so many trite clichés? “It’s going to be alright.” “You’ll be just fine.” “Things will be back to normal soon, you’ll see.” These types of shallow, though well intended, words lack substance. What’s more, they fail to factor the curse. Such a mindset renders people ill-prepared to handle serious trials and tragedies. What is lacking in the worldview of most people is the painful reality of the curse.

Pandemics are nothing new. Outbreaks of disease occurring over a wide geography and affecting a high proportion of the population have a long legacy. The Bible frequently shows that disease and sickness were constant concerns in times past. In the overwhelm of a pandemic we must remember that all disease, decay, and death are echoes of God’s judgment against human rebellion in the curse that presently grips creation. If the church’s usefulness at this time is to be measured by eternity, she would do well to not count the breakout of an epidemic disease as something strange in this present world (1 Peter 4:12). Fiery trials are not intended by God to injure us but to sober our thinking as sojourners and ambassadors of Christ in a cursed world. We must remember that the curse is a necessary part of our worldview and an important component of the gospel. Because we live under the curse of sin, pandemics are nothing new.

It may be that we will read portions of our Bibles differently because of this experience. The large numbers of human lives swallowed by pestilence, plague, and other specific diseases should be read with greater weight. Untold thousands died in the plagues of Egypt (Exodus 7-11). Some 14,700 people died of disease after Korah’s rebellion (Numbers 16:49). Later, 24,000 people died from disease revealed to be related to God’s judgment against gross immorality (Numbers 25:9). Near the end of David’s reign, 70,000 men died in Israel of disease (2 Samuel 24:15). Most scholars believe that the 185,000 who died in 2 Kings 19:35 may have been a sudden outbreak of plague (directed by the Lord as in Egypt). These are tragically high numbers by any standard and especially against the smaller populations of the ancient world [1].

Pandemics are nothing new and are no respecter of persons. Some false teachers are currently promising: “If you are a believer, God will not allow the virus to touch you.” But the gospel does not deliver us from creation’s curse in this present time (Romans 8:18-25). We would do well to remember that COVID-19 most definitely can touch earthly treasures. Yet we who are in Christ must not entertain fear of earthy loss (Matthew 6:19-21). What our Lord said of men may rightly be said of diseases, “do not fear those who kill the body but cannot kill the soul. Rather fear him who can destroy both soul and body in hell” (Matthew 10:28).

Diseases are tragedies. They are an arresting reminder of the curse. Yet, though few believe it, sin is the greater tragedy. For the curse is but a consequence and judgment against sin. To steward this storm, we must remember that disease has often been used by God in acts of judgment against sinful people (Psalm 106:15; 107:17; Isaiah 10:16). In describing the curses that would fall upon a rebellious Israel, Scripture says, “The LORD will strike you with wasting disease and with fever, inflammation and fiery heat, and with drought and with blight and with mildew. They shall pursue you until you perish.” (Deuteronomy 28:22). COVID-19 poses nothing new. It presents us with yet another reminder in a world already full of such reminders. Under the curse, death is not a chance but a certainty.

Many are captive to the fear of death—and rightfully so, for they have no hope to overcome the curse and God’s judgment against sin. But in remembering the curse, we must remember Christ—the only cure for the curse. To this we will return in our next post.

*[1] In his helpful book, A Brief History of Epidemic and Pestilential Diseases (1799), Noah Webster catalogues an imposing number of examples from the annals of secular history. Webster was compelled to study the subject after an epidemic of influenza shook this land in 1789-90. He identifies the first pandemic in Rome occurring in about 738 B.C., the 16th year from its foundation. “It killed instantly without any previous sickness,” afflicting even animals so that “all nature lay one desolate and abandoned waste” (Webster, 30). In about 593 B.C., “there was a famine and pestilence in the city, and the plague depopulated Velitrae, a city of the Volsci, who applied to the Romans for inhabitants to re-people the place” (Webster, 31). Then, in 454 B.C. another terrible disease invaded Rome. “The country was desolated, and the citizens were exhausted with continual burials” (Webster, 36). In 404 B.C., a dreadful epidemic “almost depopulated Carthage” and found its way across sea and land into other nations. Many infected were sent to Sicily, which become so plagued and unmanageable that it was abandoned. “This plague was remarkable for its symptoms, such as violent dysenteries, raging fevers, burning entrails, acute pains in every part of the body; and many were seized with madness, so that they sallied forth into the streets, and tore to pieces those who fell in their way” (Webster, 43). Another severe epidemic afflicted the empire in 296 B.C., lasting three to four years and claiming untold thousands. Again, in 272 B.C., another “pestilence broke out in Rome, and raged two or three years, carrying off countless multitudes of people” (Webster, 49). In 144 B. C., “a most violent plague desolated Rome … The dead bodies lay putrefying in the houses and streets, and rendered it impossible to approach the city” (Webster, 56). Then, in 126 B.C., “a most dreadful pestilence arose in Africa … It is related that 800,000 persons perished in Numidia alone; 200,000 on the sea coast of Carthage and Utica, and 30,000 of the Roman troops. No less than 1500 dead bodies were carried out of one gate of Utica, in a single day” (Webster, 57). By 68 A.D., the Roman historian, Tacitus (c. A.D. 55–120), describes another pandemic, indicating that the “houses were filled with dead bodies and the streets with funerals; neither age nor sex was exempt.” Since Rome at that time was more than a million in population, Webster notes that “so mortal a plague must have extinguished a much larger number than 30,000 people” (Webster, 67). After all of this, Webster goes on to write, “The next pestilential period is one of the most remarkable in all the circumstances, that is recorded in History” (Webster, 68). He gives account of disease claiming “for some time, 10,000 citizens of Rome in a day” in 79 A.D., “150,000 lives in Scotland” in 92 A.D., “a plague in Wales in 114 which destroyed 45,000 lives,” etc. This small sampling of accounts is deeply sobering. This history testifies to the long legacy of pandemics.