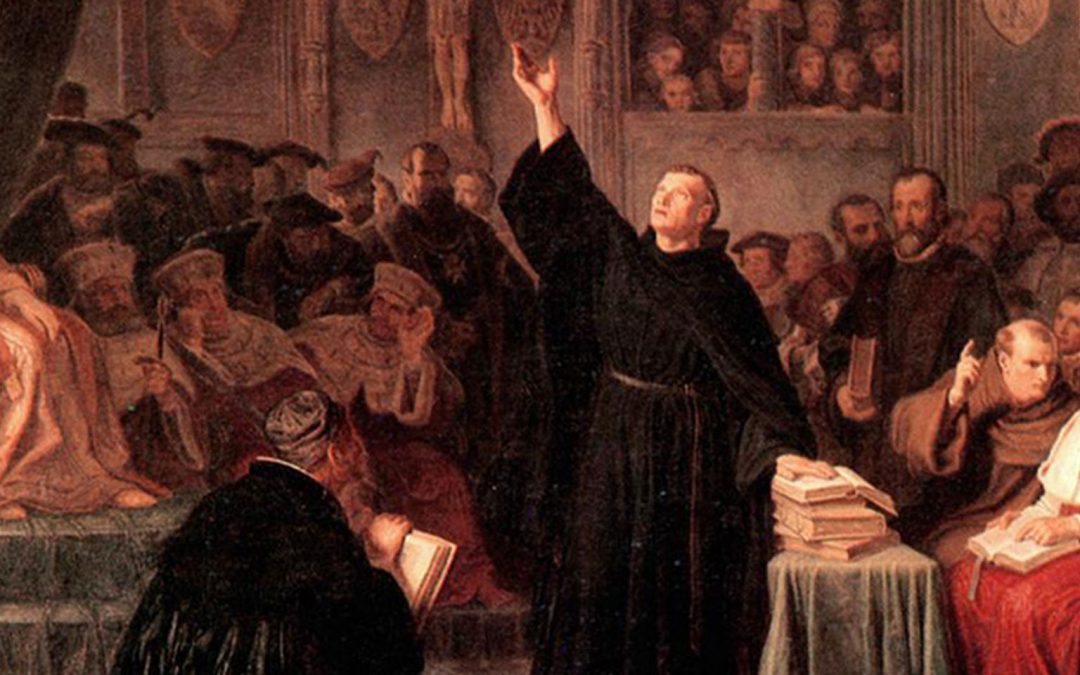 Familiarity breeds contempt. Spoiled children often lack proper motivation and appreciation. Could this be true of us—great, great grandchildren of the Reformation—with respect to justification by faith alone?

Would we, like Luther, insist that this is the article on which the church stands or falls? Do we agree with a like zeal that “it is very necessary, therefore, that this doctrine be continually read and heard in public no matter how well known it may be or how carefully learned?” Is there something missing in the common perspectives of our day? Are we distracted by things lesser to the point of neglecting things greater?

What could possibly have motivated Martin Luther so? What moved him to hold this doctrine with such primacy? Think about the magnitude of Luther’s stance:

The question is raised how one man dare stand against pope and emperor, councils and creeds, against the entire organized authority of Christendom. What arrogance there must be to contradict the finest scholars and the highest officials of the church, to set his own powers of mind and biblical interpretation against that of the whole world. Is this egomania? Is it megalomania? Are these the musings of a biblical genius, a courageous saint, or the ravings of a maniac? (127).

This comes from a chapter entitled, “The Insanity of Luther,” in R. C. Sproul’s excellent book, The Holiness of God. Sproul draws attention to the fact that some have attributed Luther’s Reformation protests to a condition of insanity. His premise in the chapter, however, skillfully makes the case that the so-called insanity of Luther had more to do with his clarity of understanding the holiness of God than anything else.

Luther was utterly and constantly terrified of God’s righteousness. He perceived that human existence is lived out coram Deo—before the face of God. That every word, thought, and deed had its naked existence before the very presence of the righteous God. To be sure, he was a man with a sensitive conscience, but even more his conscience was centered on God and His perfect righteousness. His pen later tells the condition of his own conscience:

As a monk I lived an irreproachable life. Nevertheless I felt that I was a sinner before God. My conscience was restless, and I could not depend on God being propitiated by my satisfactions (from the preface to the Wittenberg edition of his Latin works).

His conscience was restless not because he didn’t try hard. It was restless because nothing he did—no quantity or quality of religious devotion—could quiet it. In a letter to Duke George of Saxony, Luther wrote,

I was indeed a pious monk and kept the rules of my order so strictly that I can say: If ever a monk gained heaven through monkery, it should have been I. All my monastic brethren who knew me will testify to this. I would have martyred myself to death with fasting, praying, reading, and other good works had I remained a monk much longer.

A healthy and holy fear of God in a deep consciousness of one’s own sin is the best preparation for knowing and making known the righteousness that is by faith alone. While some in this generation would call Luther insane, the Bible points the other way. Minimizing sin is the true insanity (Romans 7:13). Having no fear of God is insanity (Romans 3:18). Calling good evil and evil good is insanity (Isaiah 5:20). Luther demonstrated the same kind of mind as the prophet Isaiah when he saw with new clarity the holiness of God, crying, “Woe is me! for I am undone!” (Isaiah 6:5 KJV). With Sproul, we say,

Was Luther crazy? Perhaps. But if he was, our prayer is that God would send to this earth an epidemic of such insanity that we too may taste of the righteousness that is by faith alone (145).

If an arresting view of God is insanity, then that is precisely what is missing in our day. Without it the doctrine of justification by faith alone loses its significance and primacy. May we be “insane” for Christ’s sake (1 Corinthians 1:27; 4:10).

For more resources and teachings on the Reformation, visit ReformationStewards.com

Join us for a special Reformation Celebration on Thursday, October 31 at 7:00pm (learn more).